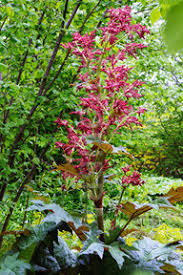 Chinese rhubarb is a type of plant which roots and underground stems are used for making medicine. It is mainly used for treating digestive problems, such as constipation, diarrhea, heartburn, stomachache and preparation of GI diagnostic procedures.

Chinese rhubarb is described as having tall flower stalks and large leaves near to the ground. The leaves’ shapes are triangular or heart-shaped. The flowers are reddish-pink or white. The parts of Chinese rhubarb that are mainly used are the roots. Its roots are dried and ground into powder (yellowish-orange). The leaves are poisonous and must not be used, even to feed animals.

Chinese skullcap roots also give impressive benefits. Read Health Benefits of Chinese Skullcap Roots. It is worth to try at home!

Rhubarb is not only high in nutrition, but it is also low in calories. That is what makes Chinese rhubarb beneficial for your health. Here is the nutrition of Chinese rhubarb in one serving:

5 amazing benefits of Chinese rhubarbs you have never known

Chinese rhubarb roots have been used widely for traditional Chinese medicine. It is used to treat chronic constipation. The effects of cleansing bowel and laxative are related to the presence of anthraquinone glycocides in the root of Chinese rhubarb. The stalks of Chinese rhubarb are also rich in cathartic compounds. It is rich of insoluble fiber that is responsible for preventing constipation.

How to make Chinese rhubarb for relieving chronic constipation:

Mix rhubarb stalks with filtered water, sugar and chia seeds (pre-soaked). Blend them with blender. Serve it as your topping of breakfast cereal.

Again, insoluble fiber in the stalks of Chinese rhubarb are effective for fighting cholesterol levels that may lead to heart disease. It is effective to lower 8% of LDL-cholesterol, the bad cholesterol in the body.

There was a clinical trial of 45 women, and the result showed that Chinese rhubarb is effective for lessening the pain during menstruation. It is as effective as painkiller mefenamic acid. Menstrual pain is very painful and uncomfortable, but Benefits of Goron Tula will give you idea of relieving menstrual pain.

The use of Chinese rhubarb once to twice a day is found to be effective to lower the inflammation in your body, including disease severity, and liver or kidney damage. 50g or 100 ml of the solution of raw Chinese rhubarb will be helpful to reduce pancreas inflammation.

There is a traditional Chinese herbal remedy that contains rhubarb. It is tested to be effective to decrease the body weight when it was put on trial of 140 people who suffer from obesity. Weight loss is a serious problem, but don’t worry, you can get your weight controlled. You may lose your weight by consuming oolong tea. Read Benefits of Drinking Oolong Tea.

The extract of 5% of Chinese rhubarb was found effective to make the healing process of mouth ulcers faster.

Chinese rhubarbs seem to be safe when the root is consumed. It is also possibly safe for being consumed by adults for around 3 months. There are some side effects caused by consuming Chinese rhubarbs.

Side effects of Chinese rhubarbs:

There are some precautions you need to pay attention too while consuming Chinese rhubarbs.